23 Things I Know About Editing 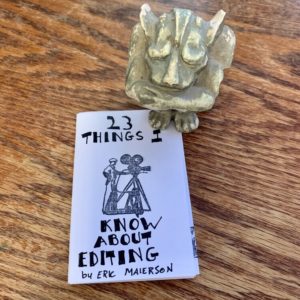 If you ever have to edit anything — photos, writing, video, audio — here is a free brochure from someone who knows what he’s talking about.

“Eric Maierson is a writer and two-time Emmy-winning video editor and producer. His work has appeared on The New Times, The New Yorker, and Time. Most recently he edited the first hour of a 4-part series on veterans in America for PBS.

Previously,  he was the senior producer at MediaStorm, a documentary production company in Brooklyn, New York. There, he edited close to 100 films, including the feature film The Distance Between Us.

23 Things I Know About Editing