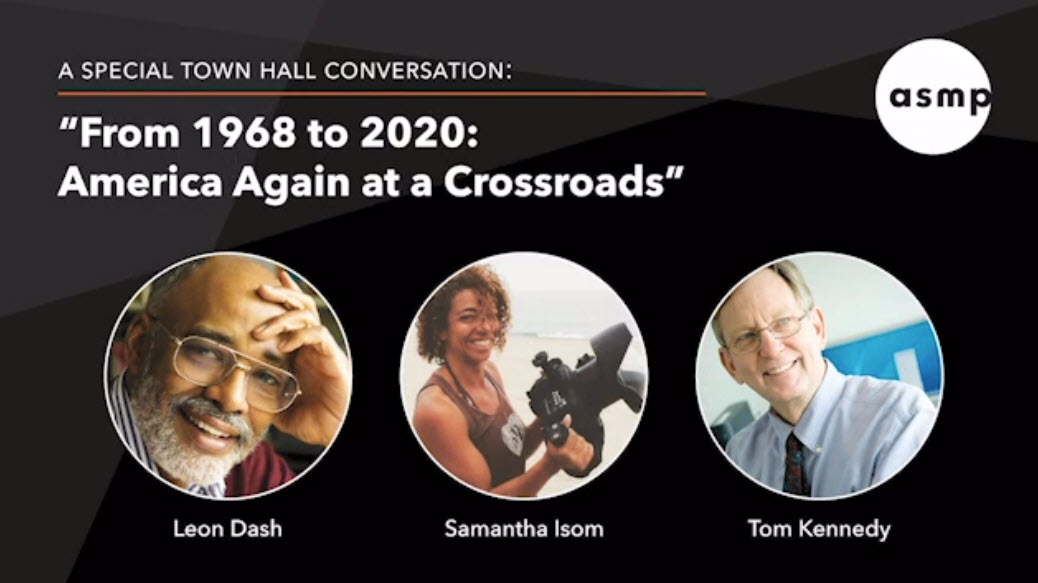 In light of recent national events and in the interest of catalyzing individual and collective reflection on what we need to do to move our country forward, ASMP pre-empted this week’s regularly scheduled Friday Town Hall. Instead, we hosted “From 1968 to 2020: America Again at a Crossroads.”

We were honored to have Professor Leon Dash of the University of Illinois at Urbana-Champaign and photographer/filmmaker Samantha Isom as our distinguished guests for this program.

Professor Dash is the winner of the 1995 Pulitzer Prize in Explanatory Journalism for Rosa Lee: A Mother and Her Family in Urban America, first published in The Washington Post. Among other assignments while at the newspaper, Dash covered the aftermath of the assassination of Dr. Martin Luther King, Jr., arriving in Memphis just hours after the assassination. In February 2000, Dash was selected as the first Swanlund Chair Professor in Journalism and Afro-American Studies at Illinois.

Samantha Isom is based in New York and spends a substantial portion of each year traveling, especially to the world’s great scuba diving locations. Through her online journal, BrownPassport.com, she documents and reflects on her experience traveling as a person of color. Her goal with BrownPassport.com is to inspire other minorities to realize their dreams and see beyond barriers, and to “help all to engage more in open truthful dialog about often taboo subject matter that is far too often swept under the rug and only spoken about within small circles.”

ASMP believes that a new and challenging American conversation must take place on the national, local and personal levels if we are to address racism and the systems that perpetuate its effects. As a professional community we have a powerful collective voice. As visual artists, we have the means to shine light where there is darkness.

This town hall is the beginning of ASMP’s effort to create a space for this essential, urgent and ongoing dialog. 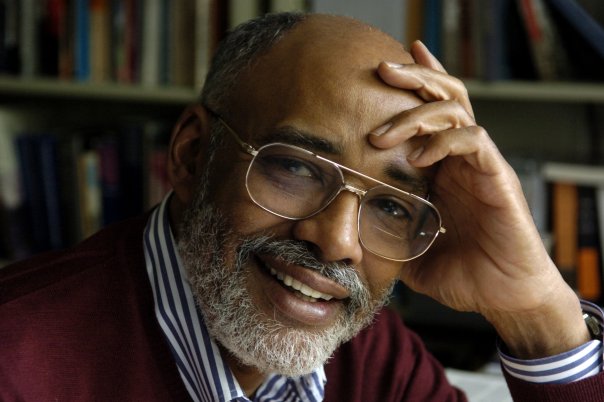 Leon Dash was born March 16, 1944 in New Bedford, Massachusetts, and grew up in New York City’s Harlem and The Bronx. Dash is a 1968 graduate of Howard University with a BA in history.  He was a visiting professor, political science department, University of California – San Diego in 1978. He received an honorary Doctor of Humane Letters degree from Lincoln University, Pennsylvania in 1996. Dash was one of 44 journalists who founded the National Association of Black Journalists on December 12, 1975. In February 2000, Dash was selected as the first Swanlund Chair Professor in Journalism and Afro-American Studies at the University of Illinois at Urbana-Champaign. In August 2003, Dash was appointed as a permanent faculty member of the University of Illinois’s Center for Advanced Study (CAS). Dash was appointed Interim Director of CAS for the academic year August 2006-May 2007. He was appointed Director of CAS in August 2009 and stepped down in August 2014. Leon Dash first worked as a reporter at The Washington Post from 1966 to 1968. He took a two-year leave of absence and worked as a Peace Corps volunteer high school teacher in rural Kenya, East Africa, in 1969 and 1970. Dash returned to The Post in 1971. He lived with and reported on Angolan guerrillas on two occasions: June-September 1973 and October 1976-May 1977, and hiked 2,100 miles on foot through war-torn Angola on the second trip. From 1979 to 1984, Dash was West Africa Bureau Chief before joining the newspaper’s Investigative Desk. Dash left The Post in August 1998 to accept an appointment as a professor in Journalism and Afro-American Studies at the University of Illinois at Urbana-Champaign, where he teaches today. He is co-author (with Ben Bagdikian) of The Shame of the Prisons published by Simon and Schuster in 1972. In 1989, William Morrow and Co. published Dash’s book on adolescent childbearing, When Children Want Children: The Urban Crisis in Teenage Childbearing. In September 1996, Basic Books of HarperCollins Publishers published Dash’s Rosa Lee: A Mother and Her Family in Urban America, a book based on his Pulitzer Prize-winning newspaper series about a family trapped in the urban underclass. In March 1999, New York University’s journalism department selected Dash’s Washington Post series, Rosa Lee’s Story, as one of the best 100 works in 20th-century American journalism. 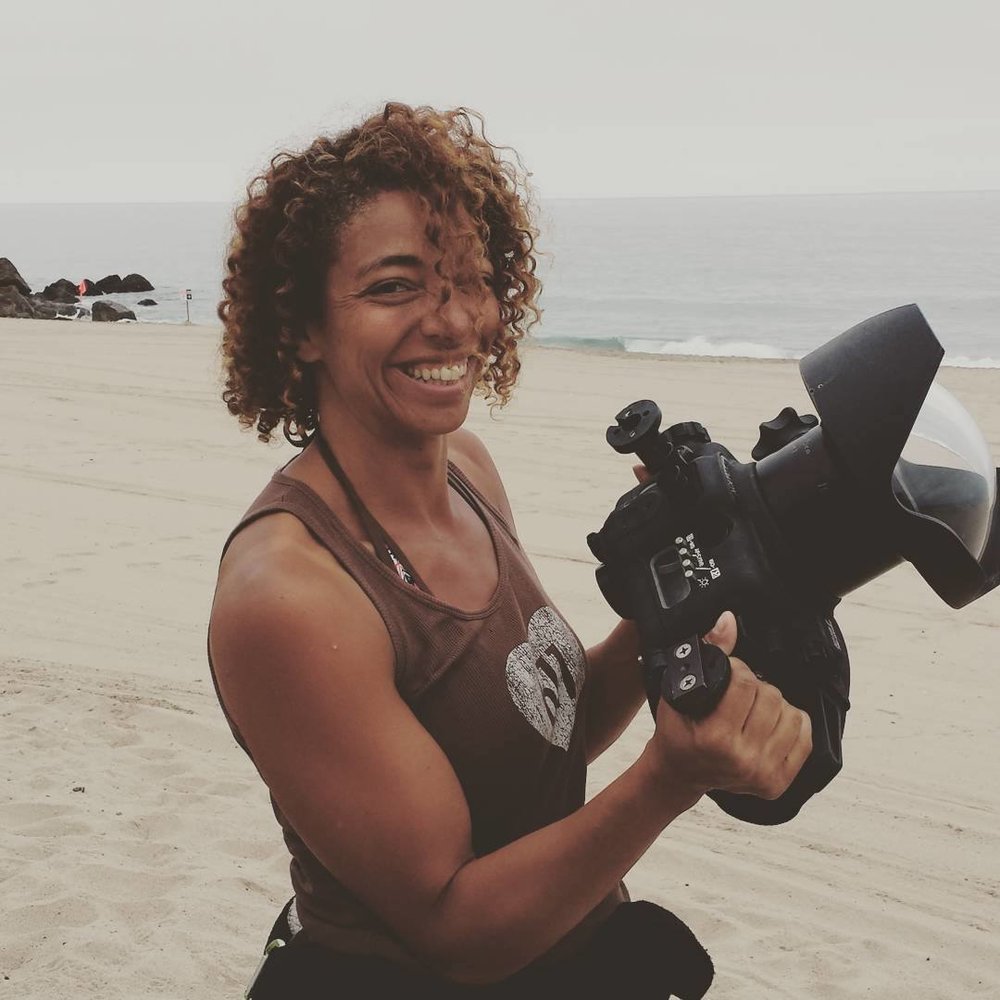 Samantha Isom is Director, Photographer, DP/Camera Operator, Content Creator at Samantha Isom Pictures. Samantha’s mother was gifted a brownie camera at a young age and began documenting every waking moment of life, Samantha was soon to follow. Samantha spent years as a photo assistant and digital tech to some of the top image-makers in the business, all while shooting on her own. Since then, she’s incorporated more motion/video to her image-making, going out as a Camera Operator/DP. She has shot all over the world and has created the online journal and travel show www.BrownPassport.com. She’s based out of New York City, though she has lived and worked in Chicago, New Orleans, Miami, Philadelphia, and spent a few months living and shooting in Hawai’i, and Indonesia. Current personal work may be viewed via www.BrownPassport.com and www.YouTube.com/BrownPassport