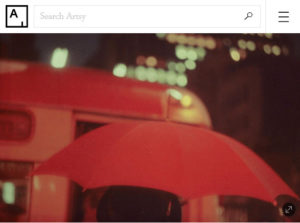 Cross-posted from Artsy.  [By Jacqui Palumbo]  “As New York’s famous mid-century photographers set out to capture the city in shades of black and gray, Saul Leiter rendered its unassuming details in expressive color. Using temperamental expired film, Leiter saw the streets in sharp punches of red and vast seas of shadow. ‘Seeing is a neglected enterprise,’ Leiter once said. A painter as well, he captured the impression of a place—figures, snow, fog, concrete, and lamplight—daubed, like brushstrokes.

Like all street photographers, Leiter abided by the laws of serendipity, but his muse wasn’t the great expanse of the city; he shot the majority of his work in the two blocks surrounding his home in the East Village, where he lived from 1952 until his death in 2013.

…In his final years and following his death, Leiter’s work was recognized at last, with major exhibitions and books. His cinematic eye and gauzy hues have been widely appreciated and tapped for inspiration—notably by filmmaker Todd Haynes for the Oscar-nominated Carol (2015), as well as Sam Mendes. But the majority of Leiter’s work was left unprinted: hundreds of thousands of negatives and slides, which he kept stashed in boxes around his home.”