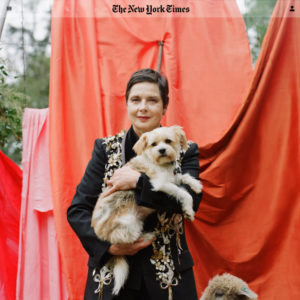 Cross-posted from The New York Times. [By Libby Peterson, photographs by Camila Falquez]

“The idea: a portrait session with the actress Isabella Rossellini that involves sheep, dogs and chickens. She was totally game. Thankfully, so were the creatures.”

Editor “Ms. [Jessie] Wender called on the photographer Camila Falquez, known for her distinctly formal yet whimsical portraits. ‘I was just excited to see what they would do together,’ Ms. Wender said. ‘Camila is so good at creating these worlds with people.’

Because of Ms. Rossellini’s busy schedule, Ms. Falquez would have only 45 minutes to create that world. She intended to take all of the shots outside in the actress’s garden while keeping a safe distance and wearing P.P.E. Outdoor-only shoots have become common for Times photographers during the pandemic, but before the shoot, the forecast called for rain. Still, with Ms. Rossellini’s limited availability, they decided to proceed.”