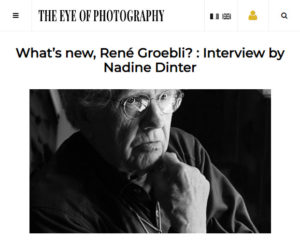 Cross-posted from The Eye Of Photography. [By Nadine Dinter]

“René Groebli (born in Zurich, Switzerland in 1927) counts among the most iconic and innovative photographers of our time. On top of that, he remains active in organizing his own exhibitions at the age of 93! His series of images published in 1949, MAGIE DER SCHIENE (RAIL MAGIC) he secured himself a place among the elite of Swiss post-war photographers. In the early 1950s, Groebli worked as photojournalist for Life, Picture Post, and other international magazines and later opened a studio for industrial and commercial photography.”

“In 1943 my father bought a Rolleiflex, but unfortunately, he did not really have an idea of the effects of aperture, shutter speed, and film speed on photographic results. To help him understand, I studied the matter and started systematically to take pictures to demonstrate various results. This fascinated me to such a degree that I quit school prematurely and started professional photographic training in 1944.”