Weegee the Famous: The Master of Down-and-Dirty Street Photography 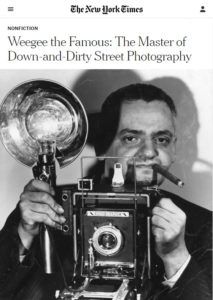 Editor’s Note: Weegee, one of the great urban street photographers, also had a career consisting of work that went far beyond his reputation who produced harshly lit pictures of dead people and society ladies in New York.

Cross-posted from The New York Times
[by Sarah Boxer]

To write a concise history of the showboating, hard-boiled photographer known as Weegee, you’d do well to follow the advice of Christopher Bonanos, the author of “Flash: The Making of Weegee the Famous.” Keep your eye on the evolution of the photographer’s name, for that is the story of Weegee.

He was born in the Eastern European town of Zolochev (in what is now Ukraine) in 1899 as Usher Felig. When his family got to Ellis Island, Usher Felig became Arthur Fellig (aged 10). It was under this name that as a teenager he found his beloved profession, when a street photographer made a portrait of him. Fellig was transfixed by the camera, the plate, the processing and the picture of himself. After that, Bonanos writes, “he never wanted to do anything else.”

At age 14 he quit school and soon began working freelance for various New York newspapers and news agencies (especially Acme) while taking on odd jobs. One involved taking pictures of coffins for a catalog; another involved squeegeeing photographic prints for The New York Times. In fact, some think the name Weegee is a shortening of Squeegee Boy, although the better-known story, promoted by Weegee, is that he had a supernatural ability, like a Ouija board, to forecast a decisive photographic moment.