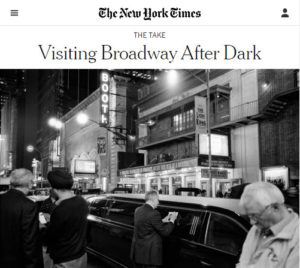 Cross-posted from The New York Times.  [By Sasha Arutyunova, Andre D. Wagner, Chris Maggio, and Sara Krulwich]  “We sent four photographers to capture scenes beyond the stage in the theater district. Here’s what they saw.”

“‘Times Square is one of the most overphotographed places in the world,’ said the photographer Sasha Arutyunova, ‘so the challenge is working against cliché.’ Arutyunova, Andre D. Wagner, Chris Maggio and Sara Krulwich, photographers with distinct sensibilities, were tasked with capturing the scenes after the Broadway shows let out.”