Videos: Robert Frank as a Young Artist, and on Photographing The Americans. 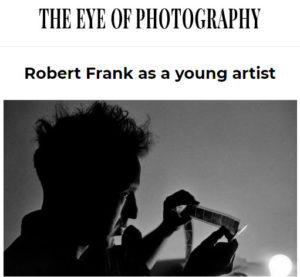 Cross-posted from The Eye Of Photography and SFMoMA.

“In June 2019, the SFMoMA published the short documentary Robert Frank as a young artist, shot in 2015, four years before his death. Robert Frank revisits his young years, coming to America to make himself a name as a photographer, the constant need to photograph to be a witness of his new country. He also recalls his friendship with the Beat Generation artists, like Allen Ginsberg.”