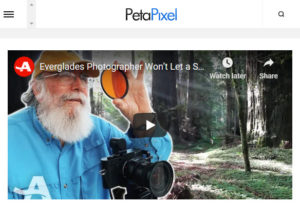 Cross-posted from PetaPixel.  [By Jaron Schneider]

“Photographer Clyde Butcher is most well known for his giant photos of the Everglades taken with a large-format camera. In 2017 he suffered a stroke, but that setback hasn’t slowed him down. In this 4.5-minute video, Butcher explains why photography continues to be important to him.

Butcher originally created massive artistic prints of his landscape photography that he used to bring awareness to the Everglades. To him, the area he photographed was a special place and it was his goal to show that to as many people as possible through his work.”