Tour de France: Inside the Peloton 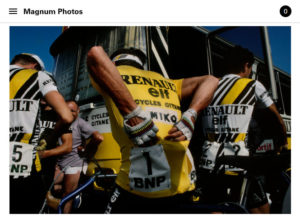 Cross-posted from Magnum.  [By Guy Andrews]

“In 1982 most of the Tour de France photographers were taking pictures for the newspapers, which at that time meant working in black and white. As a result, there isn’t a lot of colour work of that year’s race. Harry, whose work is famed for its vivid colours, recognizes that he was fortunate not to have been ‘attached’ to the Tour, a role that would have required him to cover all the action – the sprints, the finishing lines, the podium.

‘What interested me most was everything going around – the people waiting and the whole atmosphere, and the villages and the mountains and motorcycles going down at hundreds of kilometres an hour down the mountains… it was so exciting,’” continues Harry.

Tour de France: Inside the Peloton