This Pandemic Must Be Seen 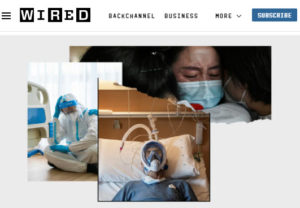 Cross-posted from Wired. [By Roxanne Khamsi]

“If we could watch what’s really going on in hospitals, there would be no more complacency.”

“Images—especially difficult ones—can, of course, do important, democratic work. During the Vietnam War, photographs of soldiers’ coffins returning through Dover Air Force Base were so influential and demoralizing that we still talk about a Dover test for military action: Will Americans tolerate the sight of flag-draped coffins? The single image of a drowned 3-year-old who had been trying to flee the Syrian war made that conflict real for many of those who had ignored it. When Emmett Till was brutally murdered and mutilated, his mother asked for an open casket funeral and said, “Let the people see what they did to my boy.” And just last summer, when a video of George Floyd’s brutal killing by police spread around the internet, it put millions in the streets.”

This Pandemic Must Be Seen