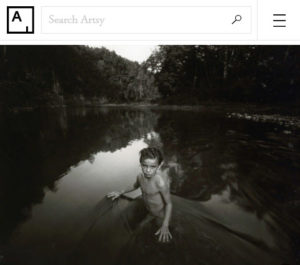 Cross-posted from Artsy.  [By Matt Williams]  “Sally Mann’s 1992 book Immediate Family overflows with photographs that capture the ecstatic bliss of youth, in all of its wildness and fragility, danger and innocence. It tells stories about insect stings, sun-kissed lunches, familial devotion, and the transformative power of nature. It is, often, almost unbearably intimate. With acres of private Virginia wilderness to roam, Mann’s children frequently appear nude in her photographs, which inevitably led to pearl-clutching from religious groups. It’s this unparalleled intimacy, though—this most private glimpse into the everyday lives of this constellation of people—coupled with the photographer’s reverent and gifted eye, that elevates it to a place beyond mere family photo album fodder. Every moment seems to illustrate a transcendence, yes, but those moments remain ragged and of the flesh even as they float towards holiness.”