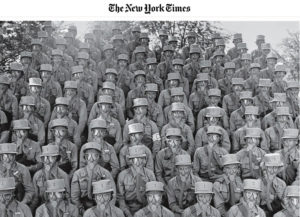 Cross-posted from Artsy and The New York Times Lens Blog.  [by Jacqui Palumbo – Artsy and Will Heinrich – Lens]  “Combined, those six photographers shot over 325,000 images from the 1930s to the early 1970s. Kushner, along with fellow curators Sarah Gordon, Erin Levitsky, and William J. Simmons, selected one story from each woman that showed a different facet of Luce’s idea of American eminence. However, by showing unpublished images, too, they peeled back the glossy veneer applied by the editorial team, whose vision often portrayed American life in a different light from what the photographers observed firsthand.”