The U.S. Government Tracked, Detained, and Interrogated Journalists. We’re Suing on Their Behalf. 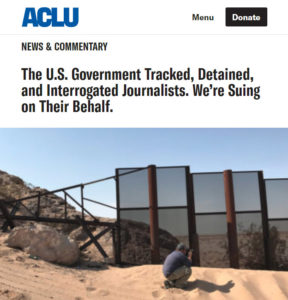 Cross-posted from ACLU. [By Scarlet Kim, Esha Bhanderai, and Mitra Ebadolahi]  “As part of a coordinated effort that undermined the freedom of the press, the U.S. government tracked, detained, and interrogated journalists who were reporting on conditions at the U.S.-Mexico border. Now, we’re suing on their behalf to defend their First Amendment rights.

Together with the New York Civil Liberties Union and the ACLU of San Diego & Imperial Counties, we’re representing five photojournalists who traveled to Mexico in late 2018 and early 2019 to document the experiences of people traveling by caravan towards the U.S.-Mexico border. Their photographs were subsequently published by news outlets such as The New York Times and The Intercept.”

The U.S. Government Tracked, Detained, and Interrogated Journalists. We’re Suing on Their Behalf.