The Influenza Masks of 1918 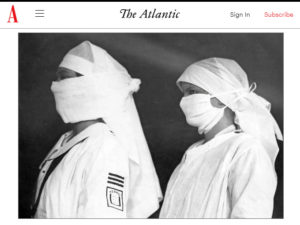 Cross-posted from The Atlantic. [By Alan Taylor]

“As people worldwide adapt to living with the threat of COVID-19, and especially as the rate of new cases continues to grow in the United States, the wearing of face masks remains widely recommended, and in many places, mandatory. A century ago, an outbreak of influenza spread rapidly across the world, killing more than 50 million—and possibly as many as 100 million—people within 15 months. The scale, impact, and nature of the disease back then were all very different from today’s pandemic—but the act of wearing a face covering to prevent further contagion became widely adopted, then as now. While some of the masks were made of improper material or were not used properly, most provided some level of protection against transmission by blocking droplets from the nose and mouth. Below, a collection of images from a century ago of people doing their best to keep others and themselves safe.”

The Influenza Masks of 1918