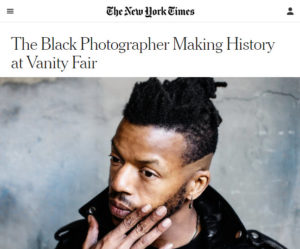 Cross-posted from The New York Times. [By Jessica Testa]

“Until about two weeks ago, Dario Calmese didn’t know he was the first Black photographer to shoot the cover of Vanity Fair. But he had a suspicion, so he asked the editors, who went digging.

“There was an image that had long lingered in Mr. Calmese’s personal reference folder: ‘The Scourged Back,’ an 1863 portrait of an enslaved man whose back is ravaged by whipping scars. When Mr. Calmese came across it again a few days before the shoot, he decided to replicate it.

‘When you look at it, it is gruesome and harsh,’ he said. But Mr. Calmese also saw in it elements that could inform his upcoming portrait: ‘He pushes back more toward the camera. His hand is at his waist — you know that line, with his profile going down the arm and coming back. And so I was like: I can recreate this.’”