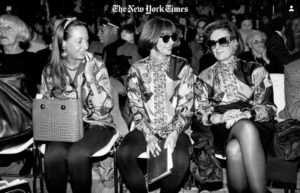 Cross-posted from The New York Times.  [By Alex Ward]  “He had an unerring eye for catching every fashion wave well before anyone else, and doing so not just on runways (though he loved designer fashion shows), but out there on the pavement of good old gritty Gotham.

Say what you will about this unfair city, the parade here never stops, and no one understood that better than a Bostonian named William J. Cunningham. Starting in the 1970s for The Times, he created a singular image of himself by visually chronicling what people (overwhelmingly New Yorkers, but also Parisians) were wearing as they went about their business. Which was often trying to get Bill to photograph them.”