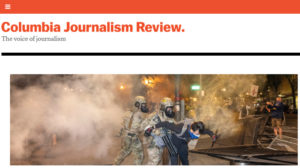 ‘They have been shooting a lot more aggressively, a lot more flash-bangs,’ Mason Trinca, a freelance photographer who has covered the protests for the New York Times, says. ‘It was very clear that they were not de-escalating at all.’”