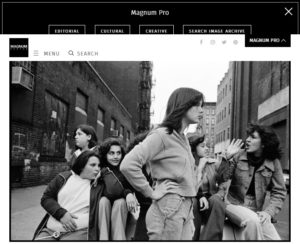 Cross-posted from Magnum.  In the 1970s, one of the great documentary photographers, Susan Meiselas, moved to Mott Street in New York… “on the outskirts of a neighborhood in downtown Manhattan, known as ‘Little Italy’ because of its largely immigrant Italian population. Meiselas was an outsider in the neighborhood, but a chance encounter soon changed that, forming the beginnings of a long-term photographic series about youth and femininity in the 1970s. Cycling home one day, she recalls ‘a blast of light flashed into my eyes. Its source was a group of kids standing with a mirror, focusing the sun on my face, nearly blinding me. That was the day I met the Prince Street Girls.’”

“Her series documented the daily lives of a group of local Italian-American pre-teen girls, who in the mid-1970s made the corner of Prince Street and Mott street their stomping ground. Meiselas was able to capture the girls’ social interactions and the synergy of their tight-knit group, some of whom were also related. As they posed for each other with growing self consciousness, Meiselas photographed them with a gentle familiarity — she captures them draped over each other, mirroring one another’s body language, often wearing the same clothes.

As with Carnival Strippers — a series that documented the lives of women who performed striptease for small-town state fairs across New England, as well as the men who attended and promoted the shows — here, Meiselas captured portraits of the girls in an uncontrived state, removed from the artistic traditions of the male gaze. Although this time, she turned her lens on her subjects’ early experiences with womanhood, and the parallel shedding of innocence.”