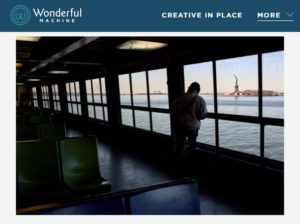 “Last year was an incredibly eventful one for now-Denver-based Stephen Speranza. In addition to moving out west from New York, the photographer continued his work with his old city’s top paper, the New York Times. Stephen was kind enough to sit down with Wonderful Machine to discuss his 2020.”

“One of the more memorable stories I worked on was that of a mortuary science professor and his two volunteer interns assisting a Queens funeral home that had been overwhelmed by the amount of deceased they were responsible for handling. Upon arrival, I was invited into the funeral home and shown to a viewing room full of cardboard caskets with hardly enough space to move around the room. It was a heartbreaking scene but a visual that truly represented the loss going on around the country. The NYT ended up selecting this photograph for their 2020 ‘The Year In Pictures’”.