Step Into a Mysterious Photography Studio From the 1850s 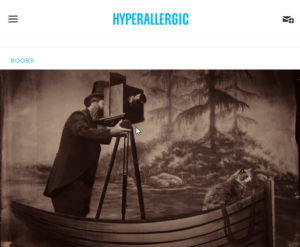 “Predicting the Past—Zohar Studios: The Lost Years presents the mythical world of a Lower East Side photography studio, founded by an Eastern European Jewish immigrant in the 1850s.”

Stephen “Berkman conveys a deep understanding — and even fetishization — of the mechanics of analog and chemical photography, but has still managed to capture a speculative bit of history with Predicting the Past—Zohar Studios: The Lost Years, a book just published by the Los Angeles-based Hat & Beard Press. The expansive collection of images presents the colorful cast of characters in attendance at the mythical Zohar Studios, a 19th-century Lower East Side photographic establishment of the eponymous Shimmel Zohar — an Eastern European Jewish immigrant who came to the United States in the 1850s (according to detailed archival materials included in the book’s back matter).”

Step Into a Mysterious Photography Studio From the 1850s