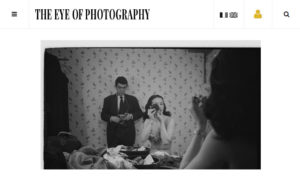 “Before becoming a world-famous director of films such as 2001: A Space Odyssey and A Clockwork Orange, Stanley Kubrick started his career as a photographer. Between the age of 17 and 22, through still photography, Kubrick learnt the art of framing, composition and lighting, his main subject being his hometown, New York. His first photograph was published in 1945 by the famous illustrated magazine Look, of which he had joined the ranks five years before the making of his first short film. The young Kubrick roamed the streets of New York, camera in hand, documenting post-war America. It was not so much formal research that interested him but street photography, observing the real world and people in particular. Back in the day, there was no better place for a young photographer to work than the American illustrated press.”