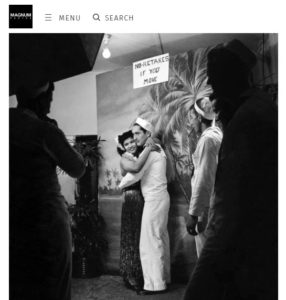 Cross-posted from Magnum.  “Shore Leave, Wayne Miller’s 1945 project made in Honolulu, Hawaii, revealed the vacationing activities of US Navy servicemen during their time off. Working undercover in the guise of an enlisted man, Miller captured his subjects engaging in a range of activities traditionally associated with holidaymaking sailors: sightseeing, gaming, tattooing, seeking female companionship, and of course, drinking.

The images were restricted by officials upon the project’s completion and accordingly have not been widely seen until now. Below, we share a selection of the photographs as well as selected pages from Miller’s original maquette he made for the project.”