Questions with an Educator: William Snyder 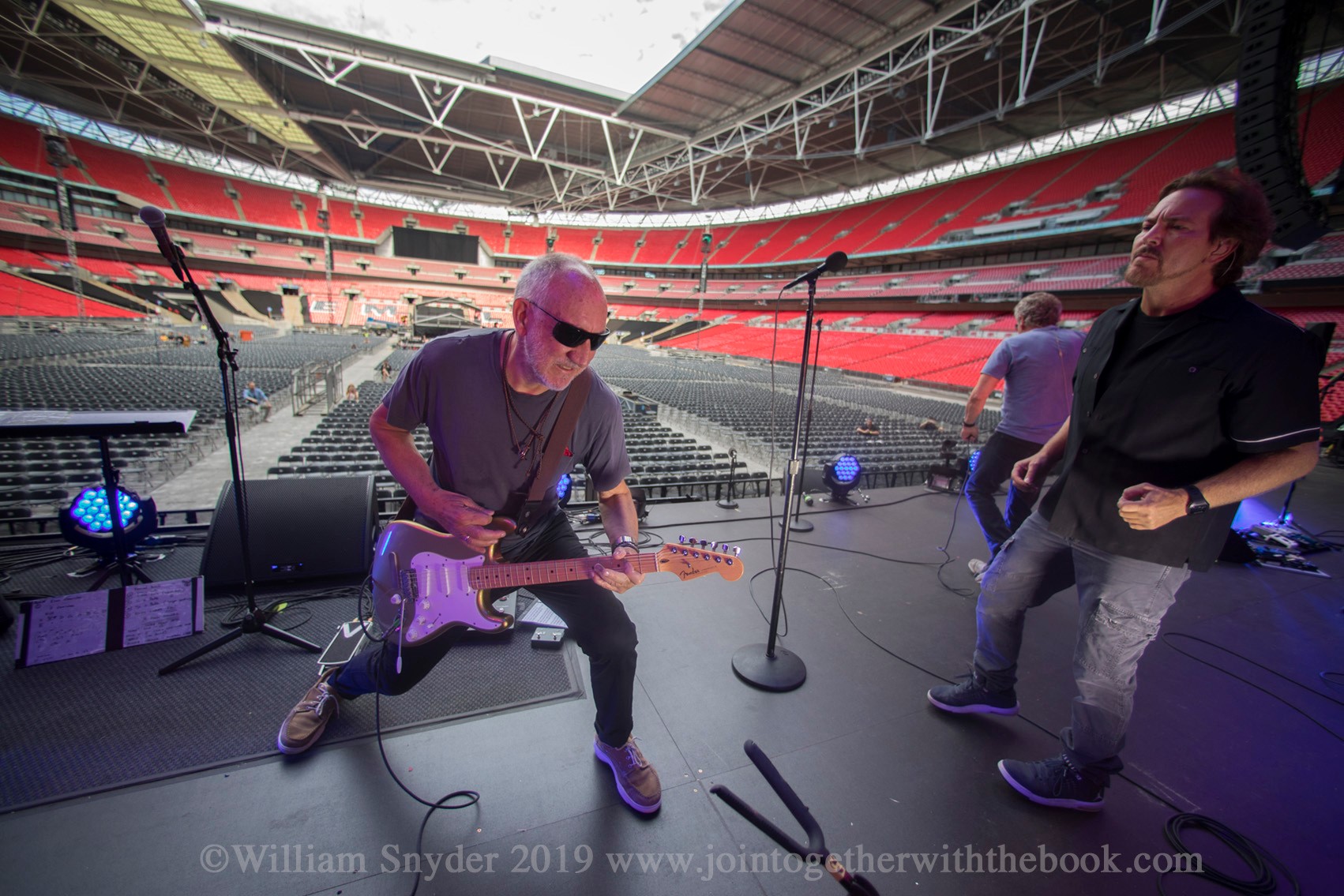 This week’s Questions with an Educator features William Snyder.

William is a four-time Pulitzer Prize winning photographer and editor who has also spent the last 18 years as The Who’s official photographer. He is now the Director of the Photojournalism Program at the Rochester Institute of Technology (RIT), where he went to school himself. He has had great success working in newspaper, as a freelance photographer, and also just recently released his first book, Join Together (With The Band). Here, William describes his path to working with The Who, the keys to his Pulitzer Prize winning projects, and how he stays current in the industry.

We asked: How did you initially obtain your position as The Who’s official photographer? What has this experience been like for you and your career overall?

William said: I had a casual relationship with Pete Townshend following an interview and photo shoot in 1993 that waxed and waned for a few years. He launched a new website in later 1999 promising a lot of visual content and we re-connected in the winter of 2000 during a couple of his solo shows in London. The Who reformed and began a tour in early summer. I was at the first show and when I looked at his website the day after the show, there was no content from the show. I sought him out and asked if he wanted any help and he invited me to go to their next show. And that’s how it began. It’s been off and on ever since. I’m currently on tour with them on the west coast.

What’s it been like? It’s been great. I am a huge fan of the band and the music and it’s great to hear and see it performed live. Over the years I’ve become part of The Who “family” which is a great group of professionals at the top of their games. In 1997 I stopped photographing full-time when I became a photo editor at The Dallas Morning News. Photographing The Who has been the one thing that has scratched my “artistic itch” since then. It’s been a “long-term project” in that I’ve been photographing them for almost 30 years and it yielded my first one-person exhibit as well as my first book. It has also allowed me to keep up with technology; it has challenged me to come up with new and interesting ways to photograph the “same thing” – not that The Who ever do anything exactly the same way every night. They are constantly on the edge of coming off the rails because they push so hard every show. I also enjoy trying to grab the odd storytelling image backstage.

We asked: You have earned multiple Pulitzer Prizes and even led the Morning News’ Photography Staff as Director to a Pulitzer Prize. Please explain what you find to be the keys to these successes.

William said: I think the key is pretty simple – great visual storytelling, not just great photos. The Pulitzer history at The Dallas Morning News has revolved around that very thing. Almost every Pulitzer The Morning News has won has had a strong visual/photo component to it. For me, the story always comes first and all of that story should involve emotion. If you look at all the stories which I’ve been involved, emotion is the key to many of the images. I’m not interested in what pictures look like – I’m interested in what they feel like.

We asked: Were there any similarities between these prize-winning projects?

William said: None, other than emotion and storytelling. The variety of subjects is what I am most proud of: An air-crash investigation, Romanian orphans, the Summer Olympics and Hurricane Katrina. Now, I didn’t photograph Katrina; I was the Director of photography and I am extremely proud that The Morning News photo staff – photographers, editors, lab techs – all came together, did their jobs to their highest abilities and owned whatever assignment they were given or found. We gave them the resources to do their jobs at the highest level – every single one – delivered.

We asked: How did you decide to re-enter the world of academia as a professor? What was this process like?

William said: I took a buy-out from The Dallas Morning News in the summer of 2006. It was a surprise to everyone, but I felt I had done just about everything I could there. I had been a very successful photographer and had accomplished just about everything a DOP would want to accomplish. I was looking for a new challenge so I thought I’d go to a smaller paper and get back to working directly with photographers. Ultimately, I decided that newspapers were no longer for me and chose to become a freelancer – and my first big job was to tour with The Who for 10 weeks in the fall of ’06! I also had a youth sports photography business that was very lucrative. That was going to be my future.

When I left The Dallas Morning News, I had been teaching for nearly 15 years as an adjunct at The Art Institute of Dallas and then The University of North Texas, so, when the opportunity came to apply for a teaching position at my alma mater – RIT – I didn’t have a lot of qualms. We agreed that I would “give it a try” for one quarter at the end of the ’07/’08 school year to see how we fit – how I liked teaching full-time and how they liked my teaching. That tryout went well and I was hired with tenure and full professorship so I could run the photojournalism program. It was a very good deal as many of your readers will know. I’m very proud of what we have accomplished in that time and I’m especially proud of the students who have gone through our program. We have focused more on picture editing than straight video or still shooting and it has paid off handsomely. We have alumni at The New York Times, Time magazine, The Washington Post, The Smithsonian, Buzzfeed, abcnews.com, matteo.com, Education Week, and a myriad of other places. And our photographers/videographers have done equally as well.

We asked: Given your lengthy career and continued success, how do you stay current in the changing industry?

William said: I spend a lot of time visiting friends in the industry, talking to our alumni that work in all those great places across the industry, and listening to the faculty I’ve put together – Jenn Poggi, Meredith Davenport and Josh Meltzer. In addition, I volunteer in industry educational programs: I was the speaker coordinator for the Northern Short Course for about 5-6 years and now serve as their MC since I became the Chair of The National Press Photographers Association’s Best of Photojournalism contest. It’s important that I stay up with what’s going on and then bring that back to our students. However, the one constant in all of this is the focus on storytelling and not the “latest thing”. It’s that focus on storytelling that has helped make our students so valuable across industry.

We asked: What is the main piece of advice you share with your students that you wish was shared with you early on in your career?

William said: While it was always in the background when I was coming up, I always tell students that story telling is IT. As my friend Brian Storm says, “Storytelling is a boutique skill.” Not everyone can do it. If all you can do is take “good photos”, well, anybody can do that nowadays. The new iPhone is pretty amazing and look at the National Geographic amateur contests. There are amazing photos in there. But, I bet none of them can tell a real story with photographs. It’s not easy. It’s not just a bunch of photos made around/about a subject. You need to be able to tell a real story.

The other thing I tell them is that they have to be a professional and they have to be able to make photographs for any assignment, at just about any time. One can’t afford to only photograph what one likes when they’re first starting out. There are bills to be paid. One can be a “great photographer” when everything is perfect and everything looks wonderful – but to be a professional photographer, one has to be able to deliver, no matter what. If someone wants an environmental portrait shot outside and the light/weather are horrible, what are you going to do? When the athlete you traveled 500 miles to photograph playing in a game is benched, how will you handle that challenge? THAT is what makes a professional – being able to deliver when circumstances are less-than-perfect.

William’s book: Join Together (With The Band)
Published by: PSG
Join Together (With The Band) is a museum quality, collectable hardcover coffee table book measuring 12 x 12 x 1.0 inches with 214 pages that captures The Who’s explosive stage shows as well as quiet moments off-stage in many never-before-seen photographs spanning 1980 to 2017. Snyder has been the band’s official photographer for 19 years. The foreword is by Pearl Jam frontman Eddie Vedder. The book has the full blessing and support of Pete Townshend and Roger Daltrey. 50% of the profits go to Teen Cancer America, Pete and Roger’s main US charity that provides cancer wards for teenagers.

While it can be purchased on Amazon, we ask that folks purchase it from our website to maximize the amount we donate to TCA. Website is: www.jointogetherwiththebook.com