Questions with an Educator: Ron Tarver 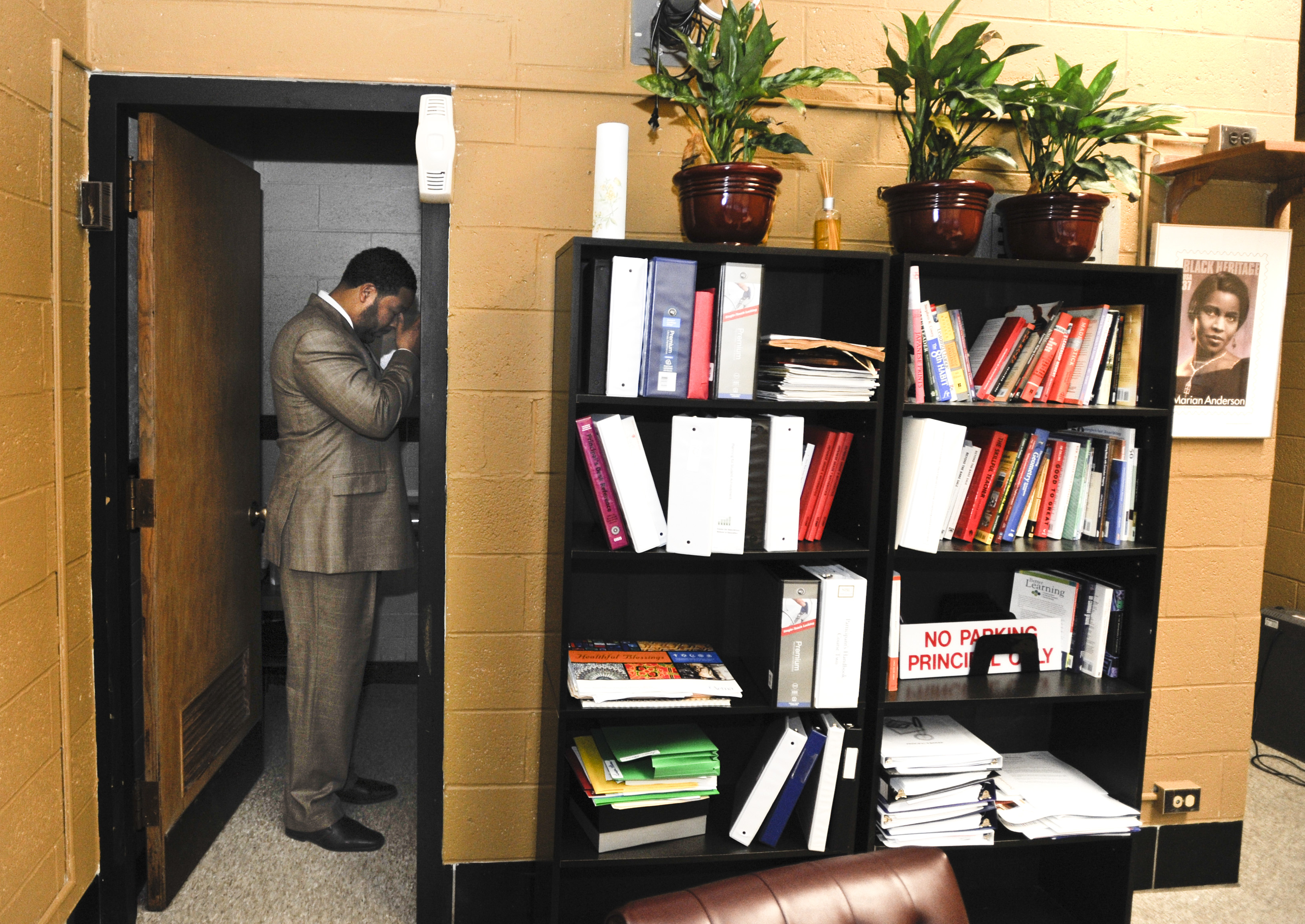 Otis Hackney, the (then) newly installed principal at South Philadelphia High school says his morning prayers in a small private bathroom in his office. Hackney was recruited from a suburban school to restore calm in the school after a series of racially inspired incidents.

This week’s Questions with an Educator features Ron Tarver.

Ron is the Visiting Assistant Professor of Art at Swarthmore College, as well as a Pulitzer Prize winning photographer for his work documenting school violence in the Philadelphia public school system. He is a seasoned photojournalist who spent 32 years at the Philadelphia Inquirer and has also been recognized for his work in the field of fine art photography. Here, Ron details his Pulitzer Prize winning project, how he advises his students to find inspiration, and advice on marketing techniques.

We asked: Please describe your Pulitzer Prize winning project that documents school violence in the Philadelphia Public School System. What were you hoping to convey through this project?

Ron said: The school violence project was a staff effort first and foremost. I was lucky to have such dedicated colleagues to work with. School violence in the Philadelphia public schools was getting out of hand. What prompted the Inquirer to commit such large staff effort was a violent racially motivated incident involving Asian and Black students at South Philadelphia High School that spread several blocks away to another school. My initial role was to photograph school meetings, teachers and students during interviews.

But the part I’m most pleased with is a photo essay on Otis Hackney, a principal brought in from the suburbs by the school reform board to affect change in the student body at South Philadelphia High. It was a daunting task. The school had been plagued with substantial racial tension between Black and Asian students and thus morale was extremely low with school officials. The story reporter Jeff Gammage and I detailed how he established calm at school, implemented multi-racial programs for students, and dealt with the morale of his staff. I hope my work conveyed the almost Sisyphean task Hackney had before him and how the efforts he put in place changed the school for the better.

We asked: You had an extraordinarily successful 32-year career before starting as Visiting Assistant Professor of Art at Swarthmore College. What drew you to this position and why did you make this career change?

Ron said: I had a very good run at the Inquirer, but due to budget constraints, as with all newspapers back then, they offered significant buyouts to employees who had been there as long as I had. It came at a time when I felt I was at the end of my photojournalistic life and was looking for something else. Not that I didn’t love what I was doing, but my passion had been creating long form photoessays for the Inquirer Sunday Magazine which folded. After that, the news hole shrank, limiting the amount of images that could be used.  I became more interested in fine art photography as a means to express my creative side.

After winning several awards including a Pew Fellowship, I was approached by the Sande Webster Gallery who represented my work for 15 years before closing. One of their artists was Syd Carpenter, an amazing ceramicist and professor at Swarthmore College. She was the studio coordinator at the time and asked me if I would be interested in filling in for an adjunct professor who was going on maternity leave. After filling in for a few years the professor left and I assumed her position. In 2014 after taking the buyout from the Inquirer, I was offered a faculty position at the college. I feel I have had two dream jobs.

Ron said: I think it important for students to shoot what they are interested in. It should be something that they find fascinating and desire to know more about. A friend, Henry Horenstein, has a book called “Shoot What You Love.” I think there is no better advice.  As for myself, I have been a bit of a chameleon. I’ve found inspiration from everything from nature to social/racial concerns. I don’t have a formula for finding inspiration – it’s something that just happens. I believe it comes from being aware, reading and doing research. For example I’m currently involved in two projects. One is reinterpreting photographs my father made in the 40’s-50’s to create original images that make comments on the current racial climate. My father photographed people in the small town of Ft. Gibson Oklahoma where I grew up. During the time he photographed, the town was divided 50/50 between Black and white. I find the images he made of the Black side of town compelling in that they show a vibrant, thriving community seemingly undeterred by the racial pressures inherent of the day. I use his images to create constructions that point to modern day conflicts; I then re-photograph the constructions. It can be a long and sometimes tedious process, but one that I find I am drawn to do. I call the project an “An Overdue Conversation with My Father.”

My other project, “Impressions of the Black Community”, is a reexamination of my work over the last 35 plus years to create an exhibit that questions what is the Black community. I hear the term Black community tossed about in the media daily. It’s almost as if it is a group of people with the same agenda, all speaking with a singular voice. My goal for this traveling exhibit is to create a discussion on the subject. Beyond the exhibit it will involve a book, film, lecture, and opportunity for the viewing public to express their definition of the Black community.

We asked: What is something you learned as a young photographer that remains extremely important in the current industry? Why does it prevail?

Ron said: The main thing I learned was that in order to get better at photography you must shoot a lot of pictures. No amount of instruction, lectures, or research replaces putting your eye to the viewfinder and seeing. Henri Cartier-Bresson said that your first 10,000 images are your worst. I firmly believe that.

I see some of my students take 10 or so pictures for any given class assignment and call it a day. Today’s technology allows for hundreds of photos to be taken at little expense. Why not shoot until you’ve exhausted every angle, lighting situation, exposure combination etc.

We asked: Your work has been exhibited both nationally and internationally. What marketing or visibility tips do you typically share with your students that you think contributed to your own success?

Ron said: I have been very lucky in that I haven’t spent a lot of time on marketing – which is not a good thing. Most of the show I’ve been in came about by being invited. Having said that, I do use Instagram and Facebook as a means of marketing. I also maintain a mailing list of anyone who has purchased a print or attended an exhibition.

The market is super saturated with many talented image makers. However, there has never been a better time for one to market their work cheaply and spontaneously to large groups of people. They should take advantage of all the social media platforms and pay attention to the analytic tools offered through Google, Amazon etc. Networking is also critical. By getting involved with organizations such as ASMP, SPE, or NPPA, they get to meet professionals and peers face to face, show portfolios and socialize.