Questions with an Educator: Koci Hernandez 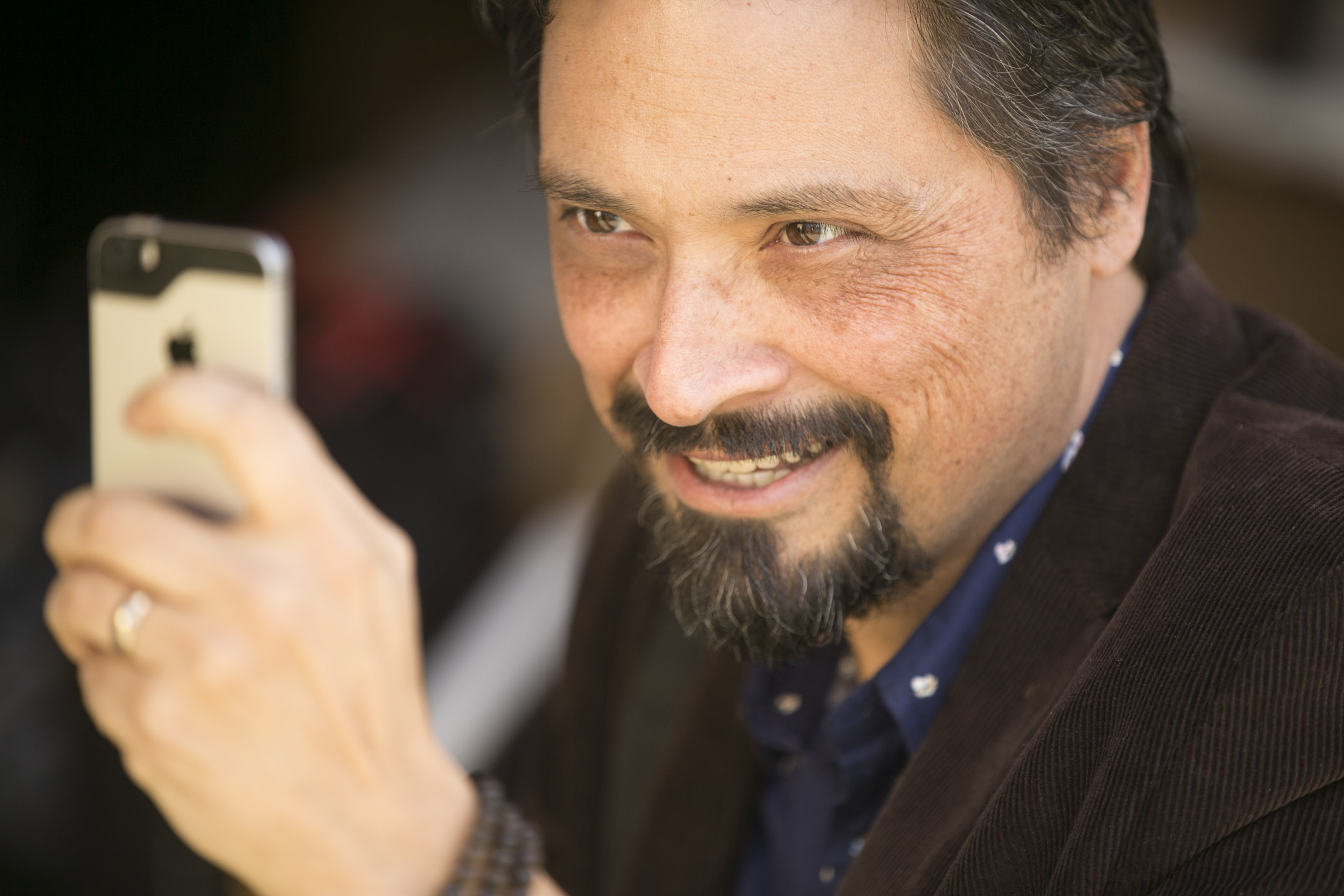 This week’s Questions with an Educator features Koci Hernandez.

Koci is a widely recognized photographer and educator who holds the position of Assistant Professor at UC Berkley. He has received countless accolades for his education skills and has completed truly captivating photography projects. He has also published a book titled, “The Principles of Multimedia Journalism: Packaging Digital News.” Here, Koci tells us a bit about his California Youth Prison Systems Project, explains what it took to publish the above mentioned book, and his favorite parts about teaching at UC Berkley.

We asked: You have had an extremely successful career earning accolades such as two Pulitzer Prize nominations, the James K. Batten Knight Ridder Excellence Award, as well as being named one of the “Top 25 Influential Communications Professors.” What would you personally attribute your success to? Explain.

Koci said: I would have to attribute my success in all honesty to pure, blind and naive passion for photography; ultimately any visual communication period.

I was really fortunate to fall into the profession of journalism without any previous knowledge. In fact, no grounding in the fact that you could even make this a career. I stumbled upon it and learned how to be a photojournalist while working as a photojournalist at a small newspaper in Southern California. So, my trial was certainly a trial by fire. Along with that kind of trial by fire, comes a youthful exuberance – a youthful ignorance where the world potentially has no boundaries. And if you can dream it and you have passion for it, you can make a career out of it. That’s what I gleaned from those around me who were passionate journalists and photojournalists. All I wanted to do was emulate them. They were young, focused, passionate community journalists working for the Ventura Star Free Press in Southern California. I attribute a lot of my early foundational success which built me into the journalist I am today to those that I was lucky enough to be around and surround myself with. Specifically. while working at a very small paper in Southern California called the Ventura star free press.

That newsroom in particular, the photojournalists and journalists there and the managing editor and director of photography really took me under their wing and really laid some great foundational tenets of both journalism and ethical photojournalism. So really, I was learning on the job.

I think that my position in life, coming from a lower to middle class upbringing, not really having strong role models, having a bit of imposter syndrome and feeling like I needed to work a little harder because I didn’t have some of the advantages that those around me had, helped instill a work ethic and a perspective on life that hopefully has served me well. Maybe some of my accolades prove that.

We asked: Please describe more about your project focusing on the California Youth Prison System. How did you land on this topic and what did you hope to accomplish through the project?

Koci said: This was a very expansive, very long project that took maybe more than a year – if not longer. This was a collaborative project that would naturally emerge from any newsroom. The story itself was based on the brilliant reporting and journalism of then reporter for the San Jose Mercury News, Karen DeSa. It was her project.

It was based on a news story about how the California Youth Authority had been subjecting youth prisoners to a kind of cage-like education. They would shackle the students to chairs while they were being instructed in a classroom setting, and then it went beyond that to literally building a small chain-link cage around and over them. The project was an attempt to look at the system and the changes that were said to have been made in the (CYA) California Youth Authority.

We had pretty unprecedented access during our time – some reformation in the classroom and the general challenges and mental health issues that go on within these circumstances we open to our cameras. We were able to follow around workers and be within the system quite intimately for a very, very long period of time. We pretty much had open access. The project was not only grand in scope, but a highlight of my career. It was a master class in the art of collaboration, both with a state system and within a newsroom. It was myself and another fantastic principal photographer and photojournalist, Judith Calson. It was an amazing opportunity to work within such a constrictive system, and yet, to have the opportunity to be able to tell the stories that are often overlooked because of those circumstances.

One of the things I reflect back most to my students is to never take, “no” for an answer. What I mean by that is, journalists, need to push for opportunities like gaining access to youth prisons, and other institutions and organization that seem unpenetrable. Always ask for access to those places because you may be surprised at the answer. The CYA project really enlightened me to that idea; that you could have a prison warden who would be shockingly open to allowing media to come in.

The takeaway from that really is, “Go find them!” This is what I try to convey to my students and is something I learned from another great educator and mentor at Berkley, Cynthia Gorney. She used to hang a poster on her office door that said, “Find them,” meaning, “leave no door unopened and no question unasked.” Ultimately, it was an empowering project that really gave me my sea legs to be able to be a lot more persistent.

We asked: Tell us a bit about your book, “The Principles of Multimedia Journalism: Packaging Digital News.” What was the most difficult piece of the publishing process?

Koci said:  The book reflects upon the history and innovation in multimedia journalism. It looks at the very early history of how news organizations went online. I was somewhat involved in it because I was in the business at the time at the Mercury News. I was specifically involved with one of our first platforms there called Mercury Center, which was one of the very first online photographic portals. This was all under the leadership of Knight Ridder who was actually a leader in transforming the digital space early on.

Maybe one of the failures was Knight Ridders,  failure of being first. A team at the company even prototyped the idea of what tablet computing (interactive digital newspapers) might look like in the late 80s early 90s. So, in doing years research for the book, I realized that news photographers and graphic designers really had a historical impact on how is and was digitally packaged online. The book then expands itself into case studies, best practices and workflows based on dozens of interviews and research with my co-author Jeremy Rue. Digital teams at the New York Times and news organizations all over the globe spoke to us about their approaches, success, and failures. The book is really focused around the bigger traditional  “Sunday 1A” features, not the daily packaging of news.

In terms of the process itself, like many other book projects I’m sure, the process had the same ups and downs. I think the most difficult piece of publishing the book was the fact that it seems counterintuitive to be publishing a book about online digital presentations! That always felt weird. In writing, the challenge was finding that early online history had actually been erased from the Internet. We had a lot of link-rot and other things happen to the early things we did as an industry. It was difficult getting visual examples, finding old links and really doing some of analog research because the principal pieces of evidence were no longer online. Because of that, I would say that the hardest part was actually finding some of these early online examples because the Internet really didn’t become the archive that we hoped it would have become.

We asked: What is your favorite part about your current position as Assistant Professor of Media at the Graduate School of Journalism at UC Berkley? Why?

Koci said: There’s no question that the best part of my job is interacting with the graduate students. These are young upcoming journalists who have made the commitment to our industry, know the perils of being part of the tribe, especially in this day and age, and can still continue to be excited, inspired, passionate and innovative. To be around that energy, and to help foster and cultivate the spaces in which they can grow, expand and, begin to tell a diverse set of stories and begin to shed new light on parts of the storytelling world due is amazing. Those are some exciting things that keep me coming to work every day.

Also, the technological potential for students to cook up anything they want is another why I’m here. From a startup to an app, to an innovative business model, to an investigative story with multimedia elements. The possibilities are endless. In order to be a co-pilot for these students’ very important works of journalism, it’s really about being in communion and communication with the students. Being part of their projects and being part of their journalistic foundation is really exciting to me. I also get to work with ridiculously talented colleagues and peers who are all working journalists. UC Berkeley is a professional school that is constantly creating. Being in that environment and around these people is absolutely stunning, amazing and jaw-dropping every day.

Koci said: The key to successful collaboration is always a willingness to compromise and to be willing to be disappointed by the truth. I think that in any collaboration, you’re going to walk in with your own set of ideas and your own set of things you think are true, and you’re going to find out that some of those preconceptions and ideas are not true. In those cases, you have to be willing to course correct. You have to be open-minded enough to compromise and to know when you are wrong – to know when things can be improved upon.

The hardest part about collaboration is realizing that collaboration is not yelling from the stands and observing – you’re actually on the field participating. If you’re going to be on the field, you’re going to get an elbow to the face every now and then and you’re going to need to grow from those experiences. You’re going to get in all kinds of concussive situations and you have to be willing to roll with the punches, like the famous Bruce Lee once said, “Be like water, my friend.” Collaboration is, in its best form, a frictionless experience, but in its most natural form, it’s about butting heads. It’s about throwing ideas together and facing conflict. Instead of running away from it, embrace it, and find good tools and mature ways to communicate. With that, you’ll be a great collaborator.