Questions with an Educator: Bill Gaskins

by Lily Barber | May 9, 2020 | Questions with an Educator, Strictly Business Blog 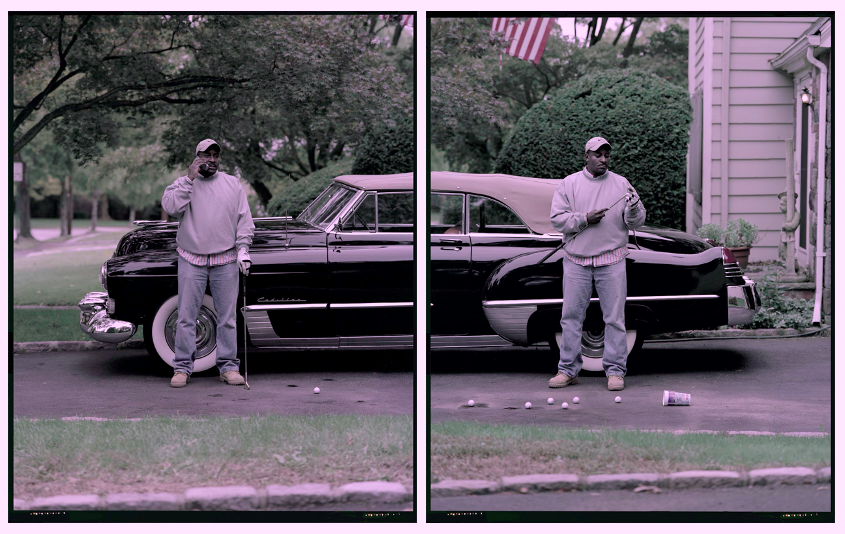 This week’s Questions with an Educator features Bill Gaskins.

Bill is a photographer as well as an educator at the Maryland Institute College of Art (MICA). He is fascinated by the myths of photography and American Culture, as well as the photographic representations of African American people. Here, Bill describes the main focus of his work, his techniques for connecting with his students and his monograph, Good And Bad Hair: Photographs by Bill Gaskins.

We asked: Please describe the main focus of your work and how this particular subject matter came to inspire you.

So, how do I produce lasting, meaningful, and relevant visual culture through photography that is not redundant, disposable, and forgettable? How can my work produce new knowledge or re-present what we think we know and understand within and beyond the white cubes of the market and museum? These are the central questions that guide what I do.

For example, through The Cadillac Chronicles, I created a problem of making a photograph of African American men who own classic models of these cars that is neither, redundant, disposable, or forgettable and doesn’t allude to photojournalism, advertising, or documentary photographs—at first glance. At the very minimum, I needed to devise a formal strategy that defied the legacy of representations of black males in photographs through these frames to accomplish that. And I needed to achieve this in a way that would be aesthetically, conceptually, and technically engaging for the viewer and myself.

We asked: What is one of your techniques for connecting with a new group of students? How does taking the time to do this change your classroom dynamic?

Bill said: I am interested in developing my classroom as a community. So, the first class meeting is broken down by having students interview each other for about 20 minutes. Then I ask each student to tell me about the other person. This simple activity immediately shatters the typically funereal silence of the first day we meet each other. I am told that an immediate sense of community is established through this ritual because students are asked to focus on someone other than themselves. Establishing a communal rather than competitive space in the classroom is the objective of this exercise.

The classroom dynamic is dramatically shifted from a window where students are looking at the progress and production of other students, to a mirror where they are asking questions about themselves, their motives, goals, and objectives—but not in a self-centered way.

The outcome of this shift in the classroom dynamic enables students to be able to articulate what they are doing, why they are doing it, the conceptual problems they choose to create and solve and be clear about the help they need from others to develop their work and ideas.

We asked: What is the one question you find your students asking year after year? Does your answer stay the same each year?

Bill said: My trajectory as a teacher began as a graduate student in the Department of Photography & Cinema at The Ohio State University. My first teaching post graduate school was The School of the Art Institute of Chicago, followed by The University of Missouri, Parsons School of Design, Cornell University Department of Art. Presently I am the (re)Director of the Graduate Program in Photographic & Electronic Media at MICA. At each institution I have gotten the same question. “How can I get to the next level in my work?”

My response to the question is specific to the student who is asking the question. But the general answer comes down to asking the student a series of questions.  I want to know where they are in their work. Where are their interests? What are the conceptual, aesthetic, social, cultural, and historical and art historical questions they are thinking about? The answer to these questions has been commonly the first steps toward “their next level.” I also remind students that informed work comes from people who are informed about issues and ideas beyond art making and art history through ideas that inform and influence the production, reception and meaning of visual culture. So they have to become smarter than the equipment they use.

We asked: What is your biggest accomplishment as an educator or photographer?

Bill said: I was named the Elaine Jacobs Endowed Chair in Visual Art in the James P. Duffy Department of Art & Art History at Wayne State University in Detroit. There, in collaboration with an extraordinary team of people at the University and from an assortment of communities in the city, I produced, a short film about the role of hope in the lives of people living in a city that many consider hopeless titled The Meaning of Hope.

We asked: Please describe your monograph, Good and Bad Hair: Photographs by Bill Gaskins. What were you hoping to reveal through this project?

Bill said: As a producer and spectator of visual culture, I know a great deal about the history of photography and how it has been used in art, journalism, advertising, and documentary photography, as well as popular culture. It frames representations of nonwhite bodies in general and Africans in America—especially those descendants of the Atlantic slave trade—as less than human and lacking in intelligence. In Good and Bad Hair the bodies and faces of African American people are representations of humanity—through each photograph. The work offers any viewer the chance to see something of themselves in the representation of these particular faces and bodies. Nothing about the work denies access to self-revelation to any viewer who doesn’t share the skin color of the people in those portraits. Last year, I took over The New Yorker Magazine Instagram page with a week of work from the book. I have been gratified by the multi-cultural response to this group of photographs that have a timeless quality in form and content. My current objective is to secure a publisher that will produce a second edition of the book for a new generation of viewers.

Informed work comes from people who are informed about issues and ideas beyond artmaking and art history through histories, theories and philosophies that inform and influence the production, reception and meaning of visual and media cultures.

Thought leaders working in photography and media must regularly replenish aptitudes, and literacies through scholarship and dialogues that enable them to be smarter than the technologies they use and make impactful visual culture. This will be the central mission of the Photography, Media & Society program at MICA.