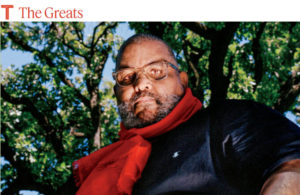 “Bey, who is 66, is part of a tradition of Black photographers who have elevated the Black subject in contemporary art beyond pure documentation or tedious clichés. He has expanded upon the legacies of James Van Der Zee and Roy DeCarava, whose images of Harlem challenged preconceived notions of being Black in segregated America, as well as the legacy of Gordon Parks, who cataloged the daily lives of Black Americans during the civil rights era. They were artists who, like Bey, could distill an entire era in a single frame, and make small, human moments feel historic in and of themselves. Bey got his start as a street photographer, mostly shooting the people he encountered in and around Harlem and Brooklyn, N.Y. He is still best known for his magnificent portraiture work, in which his subjects seem almost preternaturally at ease. Take, for example, the young lovers from ‘A Couple in Prospect Park, Brooklyn, NY’ (1990). They gaze into Bey’s lens with such perfect comfort, it’s as if Bey’s camera has turned the viewer into an old friend.”