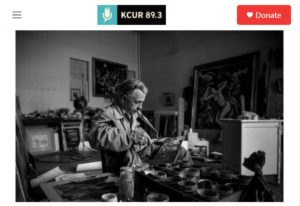 Cross-posted from KCUR. [By Julie Denisha]

“Nick Vedros didn’t know what to expect when his uncle, Michael Mardikes, handed him a box of photo negatives. What he found inside took his breath away. More than 60 years ago, his uncle had captured hundreds of images of Thomas Hart Benton, the famed painter, in the process of creating a mural.

Vedros, a commercial photographer in Kansas City, quickly arranged a visit with Mardikes, who is 93, and lives in an apartment with his wife Myrtia near the Nelson-Atkins Museum of Art.

‘You’ve given me close to a thousand negatives and I’ve been going through these for weeks,’ Vedros told his uncle. ‘And Mike, you have some phenomenal stuff. I love what you shot.’

Mardikes was 29 in 1955 when he began visiting Thomas Hart Benton in his studio in Kansas City’s Roanoke Neighborhood. An avid photographer, he brought along his camera and he spent hours photographing the artist.”