Photographer David Burnett on Shooting His Third Impeachment: ‘I felt that historic pang’ 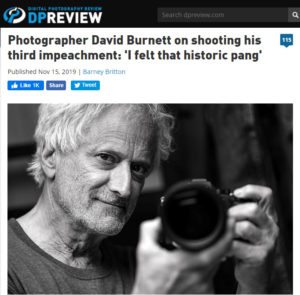 Cross-posted from DPReview.  [By Barney Britton]  “I’ve been shooting with my Speed Graphic for 15, 16 years. I started in 2003-4 doing politics, then I did the Olympics, and some presidential stuff – John Kerry and George Bush. I won a bunch of World Press Photo prizes in 2004-5, ‘Best Sports Story’ with the pictures taken with my Speed Graphic. Along the way I met this guy called John Minnicks, who I happily describe as a mad scientist, who takes a camera and then makes it into something else. John made me this camera, which he calls the ‘Aero Liberator’.”

Photographer David Burnett on shooting his third impeachment: ‘I felt that historic pang’