Pete Souza Interview: ‘I Have the Right to Speak Out When I See Wrong. And I See Wrong’ 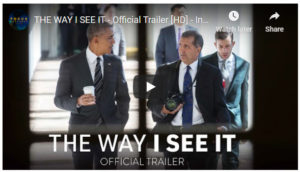 Cross-posted from DPReview. [By Barney Britton]

“Pete Souza is one of the best-known names in photography. An experienced photojournalist, he has the distinction of having served as White House photographer for two presidents: Ronald Reagan and Barack Obama. Since leaving the White House in 2017, Pete has stepped out from behind the camera, and most recently he has been putting his images to work using Instagram to pointedly highlight the differences in style – and policy – between the last president and the current occupant of the White House.

‘The Way I See It’, a new documentary film based on Pete’s books ‘Obama: An Intimate Portrait’ and ‘Shade: A Tale of Two Presidents’, opens soon. Ahead of its premiere on September 18th, I had the chance to speak to Pete about his work in the White House, what makes a good presidential photographer and why he’s no longer content to let the pictures do the talking.

Pete Souza interview: ‘I have the right to speak out when I see wrong. And I see wrong’