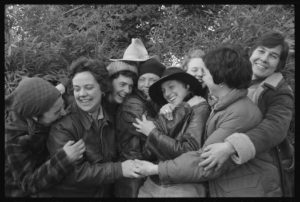 Editor’s Note: Meadow Muska is an ASMP Individual Affiliate. Get details about her exhibit running now through December 15, 2019 at The Minneapolis Institute of Art.

Cross-posted from The Star Tribune
[by Alicia Eler]

A nude woman, her dark brown hair in long braids, stands in the middle of the forest, tersely conversing with a fully clothed park ranger. The woman is Jean Mountaingrove, who in the 1970s and ’80s was co-publisher of the lesbian feminist quarterly WomanSpirit and organizer of a women-only gathering of the same name.

The encounter took place more than 40 years ago, and the photo of it, shot by Minnesota-born Carolyn “Meadow” Muska, could’ve gotten Mountaingrove into trouble.

Women discovered to be lesbians back then were at risk of losing their jobs or kids. They still felt the effects of laws that had barred gays from working in the federal government with the threat of being fired if they were found out, and still remembered the McCarthy era’s “Lavender Scare.” It was a contentious time to identify as queer, even as a rights movement emerged. For that reason, Muska kept this photo under wraps.