On Being Photographed by Richard Avedon

Cross-posted from The New Yorker Photo Booth.  [by Myla Goldberg]   What was it like to be photographed by Richard Avedon? 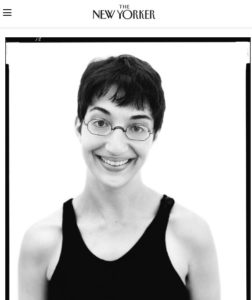 Only so many people know, and fewer still have written about it.  “He called sometime in the late spring of 2000. I was living in Brooklyn, in a two-bedroom walkup on Washington Avenue, with a distant view of the tops of the Twin Towers. My first novel, “Bee Season,” had come out in May and was getting the kind of literary attention my childhood self had always dreamed about. This was a pre-cell-phone, pre-caller-I.D. era: when the telephone rang, you picked up. After the man on the other end of the line confirmed that I was Myla Goldberg, he introduced himself and asked if I’d heard of him. When I told him that I hadn’t, he chuckled. He was a photographer, he explained. He really liked my book and was interested in taking my picture. Would I mind making an appointment to visit his studio? In the meantime, he’d have samples of his work sent to me.

“Jason?” I asked my husband, after I hung up. “Have you ever heard of a photographer named Richard Avedon?” For a moment, my husband just stood there, staring at me, and I wondered if I needed to repeat the question.”

On Being Photographed by Richard Avedon