Nick Ut: Why I Accepted Trump’s Medal Of Arts 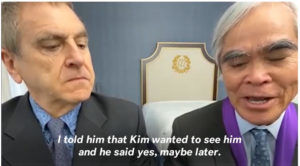 Cross-posted from Newsweek.  [By Nick Ut]

“The day before photographer Nick Ut was scheduled to receive the Medal of Arts from Donald Trump, another famous soon-to-be medal recipient publicly declined the honor: Bill Belichick, head coach of the New England Patriots and long-time friend of the president. Belichick, who was scheduled to receive the Presidential Medal of Freedom the same week that Ut was to be honored, cited the “tragic events” of the Capitol riot as his reason for turning down the award.

Ut, however, was undeterred.

Born in Vietnam and a photographer for AP for more than 50 years until his retirement in 2017, Ut saw the medal ceremony as a highly personal, not political, moment and a capstone to his long and storied career. While he is most famous for his Pulitzer-Prize winning photo of children fleeing a napalm attack—the picture, with a young naked girl screaming in pain at its center, helped change public opinion of the Vietnam War—Ut has also covered wildfires, riots, Hollywood celebrities (a photo of a crying Paris Hilton also became iconic), the O.J. Simpson trial, the Olympics and the Pope. Here is the story of his decision to move ahead with accepting the medal from Trump, despite some friends advising him otherwise, in his own words, as told to Newsweek senior editor Jenny Haward.”

Nick Ut: Why I Accepted Trump’s Medal Of Arts