‘Martha: A Picture Story’ Review: Snapshots of a Career 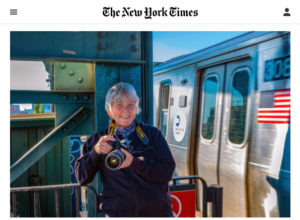 Cross-posted from The New York Times. [By Ben Kenigsberg]

“This documentary recounts the work of Martha Cooper, a photographer instrumental in establishing the validity of street art.

‘Martha: A Picture Story’ turns the camera around on Martha Cooper, a photographer who captured the era when graffiti-covered subway cars crisscrossed New York, and who was among the first to give serious consideration to the artists who scrawled on those trains. The book ‘Subway Art,’ Cooper’s 1984 collaboration with the photographer Henry Chalfant, developed an international underground following, providing a stylistic template — Cooper’s word — for aspiring graffiti writers.

In this documentary, directed by Selina Miles, Cooper and her associates take us through her career, from a stint in the Peace Corps in Thailand to her work snapping street scenes for The New York Post. Now in her 70s, Cooper is still working, and Miles trails her as she seeks to document a neighborhood in southwest Baltimore, her hometown. (In the sort of interplay between subject and film crew that ‘Martha: A Picture Story’ could have used more of, Cooper at one point asks that the movie camera be turned off — she needs to gain her subjects’ trust first.)”

‘Martha: A Picture Story’ Review: Snapshots of a Career