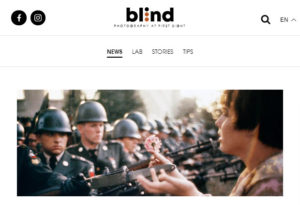 Cross-posted from blind. [By Sophie Bernard]

“If we were to keep only one of Marc Riboud’s images, it would have to be this stand-off between soldiers pointing their bayonet rifles and a young woman handing them a flower. The year was 1967 in Washington, D.C., the country was bogged down by the Vietnam War, and American youth were calling for an end to the fighting. A kind of visual counterpart to their slogan “Make love, not war,” this image is iconic, whether in its black and white or color version–the latter only found by the photographer forty years after he took it.”

…“thus, from 1955 to 1958, Marc Riboud was on the road. He traveled across the Middle East, then spent a year in India before traveling to China for a stay of several months that ended in Indonesia and Japan. For each of these countries, he bore witness to their culture and way of life by photographing the people, the streets, the customs, the religious practices, without ever succumbing to gratuitous exoticism and always with respect for others.

Over the following decade, he went from a ‘wandering photographer’ to a witness to the tumultuous events of history. In 1962, he was in Algeria for the independence celebrations; in 1968-1969, in war-torn Vietnam, where, in search of objectivity, he traveled to both the South and the North. In 1971, he covered the Indo-Pakistani conflict and in 1979 the Islamic revolution in Iran. In the 1980s, he witnessed the Solidarnosc resistance in Soviet Poland. ‘My eyes and my lens would sometimes close shut in the face of the violence”…