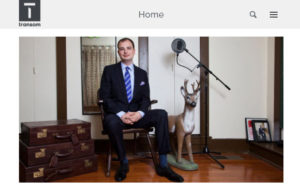 Cross-posted from Transom. [By Jesse Thorn]

“Intro from Jay Allison: The commercial world guards its secrets. The game is competitive and money is the prize. The non-profit world, when it is functioning the way it should, upholds a spirit of generosity and common good. The two cultures tend not to mix very well, but Jesse Thorn (“The Sound of Young America,” now “Bullseye”) has brought to Transom a big-hearted and wise Manifesto in which he tells you how to make good things and, more surprisingly, how to make money at it. He could have kept the secrets to himself. Instead, he wrote “Make Your Thing: 12 Point Program for Absolutely, Positively 1000% No-Fail Guaranteed Success” with fascinating parables from comedy, hip-hop, blogging, cartooning and more. Jesse’s own experience stretches across all sorts of independent media and performance. His words are practical and inspirational, and funny. They’ll help you do better work. Jesse is donating his secrets in the best non-profit tradition.”