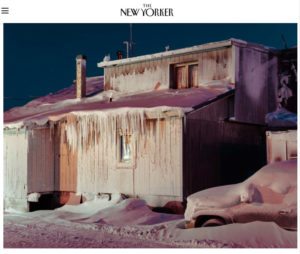 Cross-posted from The New Yorker Photo Booth.  [By Coralie Kraft]  “Utqiagvik, Alaska, is the northernmost city in the United States. Situated more than three hundred miles north of the Arctic Circle, with a population between four and five thousand, it sits on a promontory that juts into the Chukchi and Beaufort Seas, with no roads or railways connecting it to the rest of the state. With the exception of a seasonal summer barge that carries heavy provisions and equipment, all supplies and visitors must arrive via modified passenger planes, which make stops to pick up new passengers and provisions, not unlike large, airborne buses. As the Northern Hemisphere tilts away from the sun in the winter months, communities close to the North Pole experience a phenomenon known as polar night: a period of uninterrupted darkness. In Utqiagvik, this lasts for approximately two months of the year.”

“The photographer Mark Mahaney travelled to Utqiagvik this past January, during the final days of the season’s polar night. “Landing, it looked like we were dropping down onto the moon,” he told me recently. As soon as the plane doors opened, frigid air flooded the passenger compartment. Mahaney hurried off and into the airport, where a tiny room a little bigger than a two-car garage serves as the security, check-in, waiting, and baggage-claim areas. Mahaney’s fellow-passengers were members of Utqiagvik’s high-school basketball team: players fly in and out for every game.”