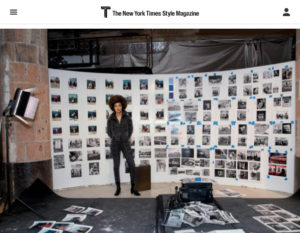 “Frazier’s radical empathy has brought her to places whose occupants have every reason to distrust outsiders. She photographs communities gutted by unemployment, poverty, racism and environmental degradation, seeking out subjects dehumanized or ignored by the mainstream media. At 39, she sees her life’s work as an archive of humanity, one that particularly documents the courage and diversity of blue-collar workers and the consequences of the policies that condemn them to struggle. For her, this is what it means to be a patriot. ‘I am showing these dark things about America because I love my country and countrymen,” she said. “When you love somebody, you tell them the truth. Even if it hurts.’”

Socially conscious artistic practices may be in vogue these days, but Frazier goes beyond hollow claims of ‘raising awareness’ with an essay in a magazine or a show at an art museum. She is the rare photographer who approaches relationships with her subjects as lifelong commitments, and who tries to make substantial, material differences in their lives. Frazier’s conviction in art that involves — and transforms — entire communities aligns her with Rick Lowe, an artist who, with his collaborators, famously converted an underserved swath of Houston into a nexus for housing, art programming and neighborhood development activities. She also carries on the legacy of the German artist Joseph Beuys, who believed that participatory art could heal society. Frazier, though, pursues these conceptual ideals while still producing formally elegant images using traditional techniques. Working mainly with a medium-format camera and black-and-white film, her intimate domestic portraits and expressive landscapes are classically beautiful, even when they depict harrowing realities. Making photographs as poetic as they are political is, for Frazier, a way of honoring her subjects. ‘She doesn’t pop in and pop out,’ said the artist Carrie Mae Weems, Frazier’s friend and early mentor. ‘These are long-term projects that deeply matter, not only to her but to the community and, ultimately, I think, to the nation.”