Joshua Kissi Is Changing the Pecking Order of Old-School Photography 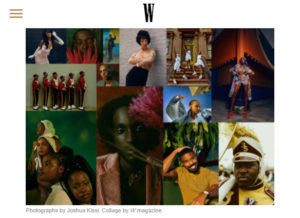 “Kissi’s projects vary in subject matter—he has shot Michael B. Jordan for the cover of People Magazine and Fuel the People activists for The New York Times’ T Magazine. His style, however, is instantly recognizable.”

“For a long time, people romanticized this idea of the starving artist because there were so few that make it to the top. Now people are finding spaces that make sense for them, and it’s not because it’s being forced upon them. They’ve had way more control and autonomy over building a space they feel comfortable creating from. They’re not making things from a scarcity mindset anymore.”

Joshua Kissi Is Changing the Pecking Order of Old-School Photography