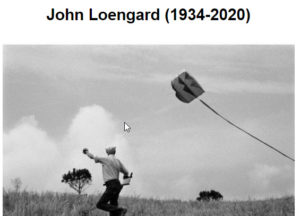 Cross-posted from The Eye Of Photography. [By David Friend] “John Loengard, the esteemed Life magazine photographer and director of photography passed away due to medical complications on May 24. This homage is adapted from the preface to Loengard’s 2011 book, Age of Silver: Encounters With Great Photographers (PowerHouse).”

“‘He treated photographers as if they were like him—intelligent—not button-pushers,” says photographer Harry Benson. “He took the photographer’s line, often against the [publishing] company, which was a very rare trait. He was a real photographer’s editor. The editors would all be in the room and agree on something and John would smile and then go away and work out the real approach to the story with the photographer. He knew that at Life the photojournalist was king.

And he was a gentleman. It wasn’t acquired—a manner he’d put on for posh people. It was his natural way of interacting. Even to the crappiest photographer coming in, he’d give some good advice. And he’s always been his own man. He didn’t need other people. He was a lone wolf who went his own way—as a photographer and as an editor.’”