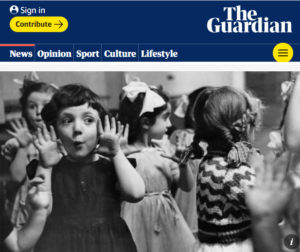 Cross-posted from The Guardian via Pro Photo Daily. [By Sean O’Hagan]

“Grace, born in Manchester in 1930, later recalled being dismayed as a teenager by the paucity of career choices available to her.

‘There were only three jobs considered by society as appropriate – teaching, secretarial work or nursing, just to fill in until you got your man.’

After she expressed an interest in photography, her father, in 1949, bought her a camera, enthusiastically encouraging her to try her hand at what was then a combative, male-dominated, medium.”

“Strikingly tall, unmistakably middle-class, and from a Scottish background, Robertson decided from the beginning to make her difference work in her favour, spending time with people until they accepted her.

In 1955 she published a pioneering series on childbirth which featured what were then considered graphic images of a young woman giving birth.

Belonging by temperament to the left politically, she was also, with hindsight, a proto-feminist, whose work often reflected the experiences and everyday lives of women in Britain.”