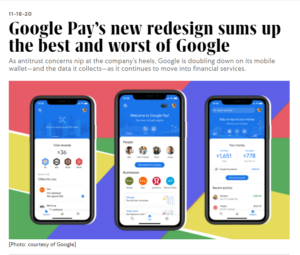 Google loyalists are sure to thrill at the company’s newly redesigned mobile payments app.

The app’s peer-to-peer payments are intuitive and conversational, packing a host of features into a remarkably simple interface. Its integrations with retailers like gas stations bring touch-free magic to the most tedious of transactions. And perhaps most impressively, its customized financial insights are surprisingly engaging and useful, in sharp contrast to the bulky, color-coded pie charts still favored by many banks and credit cards.

But this Google Pay update, geared toward the U.S. market, is more than a facelift. It’s a transition step toward the launch of Plex, a mobile-first banking service that Google plans to introduce in partnership with financial institutions including Citi next year. It’s also a tacit acknowledgement that mobile wallets, as currently designed, are failing to win over the majority of U.S. consumers.

“Many Americans still find managing money really challenging,” says Caesar Sengupta, head of payments. “People shouldn’t have to work so hard on money. Money should be working hard for them.”