Gerda Taro: The First Woman War Photographer to Die in the Field 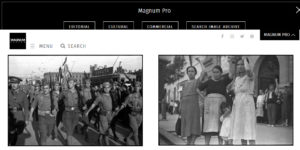 Cross-posted from Magnum Photos. [by Hannah Abel-Hirsch] Gerda Taro is sometimes known as a colleague and companion to Robert Cape, but she had a substantial career of her own. “On 1 August 1937, thousands of people lined the streets of Paris to mourn the death of photojournalist Gerda Taro (1910–1937): a 26-year-old Jewish émigré from Leipzig, Germany. Taro had died in Spain, while covering the Battle of Brunete, during the second year of the Spanish Civil War. Taro was a celebrated photographer and the first female photojournalist to be killed on the frontline.”

Gerda Taro: The First Woman War Photographer to Die in the Field