By Barry Schwartz May 20, 2020 Strictly Business Blog
No Comments 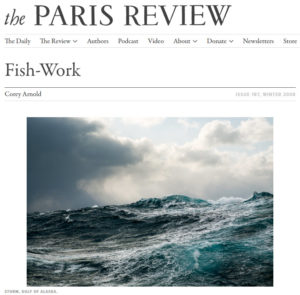 Cross-posted from The Paris Review.  [By Corey Arnold]  “Corey Arnold went on his first fishing trip to Alaska when he was thirteen, around the same time that his father gave him a 35 mm camera. He was there for sport, but what caught his eye was Alaska’s commercial fishing fleet. For five summers after he turned nineteen, he fished for salmon in Bristol Bay, returning to his native California for school in the off-season. In 1999, he graduated from the Academy of Art in San Francisco with a degree in photography. Since then, he has worked on the Bering Sea as a crabber aboard the steel-hulled fishing vessel Rollo. The crew sails out of Dutch Harbor in search of snow and king crab four months out of the year. Arnold also spends time on smaller, shorter-range boats in Norway, fishing for cod, haddock, and coalfish. Arnold takes two cameras along at sea. They stay below deck, wrapped in plastic and wedged between pillows on his bunk. He keeps them so tightly bound that nothing but the lens filter is exposed to the salt spray. The photographs are what remain after the catch is sold, shipped, and eaten, but Arnold’s first purpose at sea is always as a crewman: ‘I’ve missed some very spectacular shots because I was needed during a bad storm or heavy fishing.’”