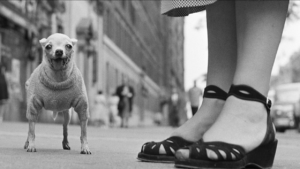 “Looking through Erwitt’s massive catalog of photographs made over more than 70 years, one might think he’s been everywhere and photographed everyone and everything. Really. His iconic photos of Marilyn Monroe, including her famous subway grate pose; the fingerpointing Nixon-Khrushchev Kitchen Debate in Moscow; segregated water fountains; a grieving Jacqueline Kennedy; hundreds of humorous dog images. His work is known the world over.

He has won almost every photography honor, including the Lucie Lifetime Achievement Award, the International Center for Photography’s Infinity Award, and the Royal Photographic Society’s Centenary Medal. One-man shows of his work have been held at the Museum of Modern Art in New York, The Art Institute of Chicago, the Smithsonian in Washington, D.C., the Paris Museum of Modern Art, the Reina Sofia Museum in Madrid, the Barbican in London, and many others. He has published more than 50 (‘I’ve lost count,’ he jokes) books of his work. The most recent, ‘Found Not Lost,’ is scheduled for release this winter.”