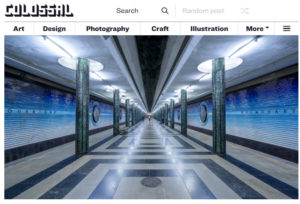 Cross-posted from Colossal.  [By Andrew Lasane]  “After traveling to 15 cities in 7 countries and taking over 15,000 photographs, Christopher Herwig (previously) has compiled a new book that showcases the diverse architecture of every underground metro station in the former U.S.S.R. Soviet Metro Stations provides rare look at mansion-quality chandeliers, ornate columns, and patterned ceilings that surround millions of commuters every day.

With a background in travel photography and documentary work for UNICEF and other United Nations agencies, Herwig was first introduced to the region while traveling through Russia via train. He later lived in Kazakhstan and most recently Jordan, where he continued to work professionally as a photographer.”