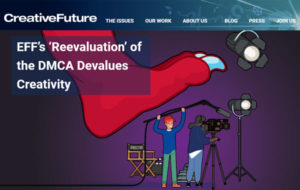 Cross-posted from CreativeFuture. “As the DMCA hearings move forward, let’s not “Think of the User,” let’s “Think of the Used” – the millions of creatives whose works have been stolen and repurposed for the past two decades, all the while lining the pockets of our country’s largest corporations.

EFF wants to protect those monopoly platforms and their business model: monetizing other people’s content. We want to protect the rights of creative people to make a living, online and off. And, that starts with being able to control whether or not their works are available online illegally without sending a takedown notice every five minutes.