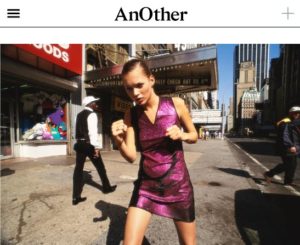 Cross-posted from AnOther. [By Belle Hutton]

“Among the editorial and personal work Luchford has created over his career, he has broken boundaries with his fashion campaign images. In the 1990s Luchford shot atmospheric campaigns for Prada – including Amber Valletta lying in a boat in the middle of the dusky River Tiber with small fires burning in the distance, or standing in a misty, snowy garden – that broke the mould; some of the images are now in the V&A’s permanent collection. For Gucci, Luchford has orchestrated epic scenes: from a 1950s Hollywood musical and a recreation of Noah’s Ark to reimagining a ‘classic symposium’ in the ancient Greek city of Selinunte, complete with punks, surfers and bodybuilders. There is drama to Luchford’s campaign photographs – sometimes mysterious and brooding, others outlandish and vivacious – and they’re often described as cinematic. ‘Rather than just posing a model and blasting them with flash lights and having them stare at the camera, I’m always looking for a sort of in-between moment – I guess that’s why people say they look like film stills,’ he says. ‘I feel like when you do that, it creates an atmosphere where people can read more into the picture; they’ll see something in the expression or try and figure out what was going on.’”