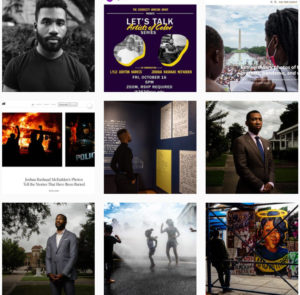 “Joshua Rashaad McFadden, a visual artist and assistant professor of photography at Rochester Institute of Technology, uses portraiture and archival imagery to explore identity, masculinity, history, race and sexuality. A Rochester, New York, native, McFadden holds a Bachelor of Arts in fine art from Elizabeth City State University and a Master of Fine Arts from Savannah College of Art and Design. In 2017, McFadden was recognized as one of TIME’s American Voices and received Duke University’s Archive of Documentary Arts Collection Award for Documentarians of Color. His series I Am A Man in the Smithsonian magazine won him the 2018 Communication Arts Award of Excellence. McFadden’s work has appeared in National Geographic, the New York Times and The Washington Post.”